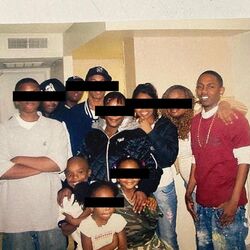 Chopper doin’ circles, it’s a Vert’, Vert’
Take him to the projects, he’s a nerd (Pop out)
I see niggas hittin’ corners in the motherfuckin’ ‘burbs, huh (Pop out)
Done politickin’ with the competition, what’s the word? (Yeah)
Put that on my mama, nigga, ate in the process
Niggas tryna tippy toe through the progress
Tongue-tied when the truth is an object
What’s the pros and cons of this next check?
When nobody ‘round, I was independent
In the 90s, sittin’ bum with the windows tinted
Had a bomb, got a strap at the party
Where the fuck niggas? At the party
Beat ‘em up (Bounce), beat ‘em up, beat ‘em up, beat ‘em up (ah)
I was seein’ double in the projects
Mad at myself when I put it to the side
Mama had to cater for the coupe
That we rode after school on the way to Popeyes (Bounce)
And niggas wanna play both sides
It’s a red dot, don’t get on the wrong red eye
It’s a headshot, let me get who are them guys
Fuck around and bury two of them guys
I’m OD in Paris, I’m OD in France
I thought that I told you, I need the advance
Put down your IG and look through my lens
A million to grandma, who did I offend?
The girl of your dreams to me is a fan
I netted ten million and did a lil’ dance
I’m fuckin’ the world, I insert my penis
My uncle G told me that I had a chance
So then I popped out and did it again
And did it again and did it again
I can not respect them, where did he begin?
Advice from the council, let nobody in
Been swervin’ through rumors
Avoidin’ the trends and duckin’ the hoes
I’m duckin’ the loonies that come with the shows
I’m grateful to Man-Man, he opened up doors
And bung’ on the tour bus to come and compose
I reach to the stars on my tippy toes
This greatest success where most niggas fold
I tell you my past, that shit don’t get old
But how could you ask like I don’t be rappin’ my raps?
These critics got everyone tapped
You gotta relax, the city where nobody sleep
Just tap in and ask where I’m at, ho This website uses cookies to improve your experience while you navigate through the website. Out of these, the cookies that are categorized as necessary are stored on your browser as they are essential for the working of basic functionalities of the website. We also use third-party cookies that help us analyze and understand how you use this website. These cookies will be stored in your browser only with your consent. You also have the option to opt-out of these cookies. But opting out of some of these cookies may affect your browsing experience.
Necessary Sempre ativado
Necessary cookies are absolutely essential for the website to function properly. These cookies ensure basic functionalities and security features of the website, anonymously.
Functional
Functional cookies help to perform certain functionalities like sharing the content of the website on social media platforms, collect feedbacks, and other third-party features.
Performance
Performance cookies are used to understand and analyze the key performance indexes of the website which helps in delivering a better user experience for the visitors.
Analytics
Analytical cookies are used to understand how visitors interact with the website. These cookies help provide information on metrics the number of visitors, bounce rate, traffic source, etc.
Advertisement
Advertisement cookies are used to provide visitors with relevant ads and marketing campaigns. These cookies track visitors across websites and collect information to provide customized ads.
Others
Other uncategorized cookies are those that are being analyzed and have not been classified into a category as yet.
SALVAR E ACEITAR
Registration is disabled.

Enter the username or e-mail you used in your profile. A password reset link will be sent to you by email.

Don't have an account? Sign up Already have an account? Login
Adblocker detected!
We have detected that you are using extensions to block ads. Please support us by disabling these ads blocker.
Refresh Close